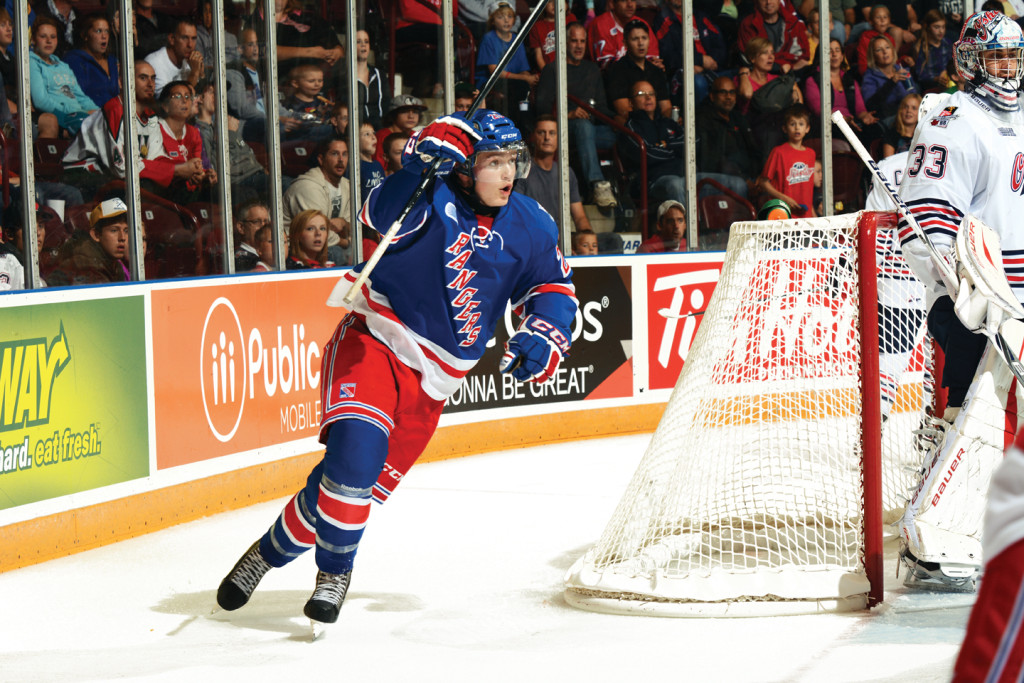 Nick Magyar’s draft weekend started with two quick flights from his home state of Ohio to Philadelphia, PA. With mom Joelle in tow, the Rangers’ reigning scoring champion checked in by phone and chuckled about his travel plans.

“It was good. Early, though!” the fresh-faced forward admitted.

He’ll have plenty of adrenaline to keep him going this weekend. Magyar is one of the young Rangers hoping to hear his name called at the 2014 NHL Entry Draft, which kicks off Friday at the Wells Fargo Center. It’s the biggest day of a young career, and while Nick is excited, there are other emotions in the mix.

“Anxious, nervous, but it’s an honour just to be here and hope that at some point my name is going to be called. I’m going in with that mindset and I’m here to make the most of it.”

His co-Rookie of the Year, Ryan MacInnis, is also in Philly and is expected to be the first Blueshirt to get the call this weekend. The St. Louis, MO native is the top-ranked Rangers player for this year’s draft, coming in at #20 amongst North American skaters in Central Scouting’s final rankings. Magyar was ranked at #32, after leading all Rangers in scoring this season and posting the fourth-best point total amongst all OHL rookies. The two young Americans joined teammate Darby Llewellyn at the Scouting Combine in May, where they had the chance to make an impression on potential future employers.

“It was tough, really tough, but it was definitely a good experience, both in the interviews and the workouts,” remembers Maygar.

“It was nice to see the guys you grew up with and know that you’re all battling for a job. It’s really exciting.”

There’s no way of knowing exactly when his name will be called, but with the support of his parents and brother, he’s ready for the anxious wait. His entourage will also include the Mitchells, Nick’s billet family in Kitchener, who are making the drive to Pennsylvania on Friday.

But no matter how long the wait is, the amiable winger is following the advice of those that have gone before him. By turning to veterans who have gone through the experience, he’s prepared himself not only for this weekend, but for the years of work ahead.

“My old coach was drafted in the NHL and played in the league, so I’ve been talking to him a lot. He basically just told me that wherever you get drafted, it’s just a number. No matter where you get picked – first round or seventh round – it’s what you do after the draft to prepare yourself to play in the NHL,” explains nick.

“Yeah, it’s nice to go early but if that doesn’t happen, you don’t give up. There’s no reason to; there are guys who go in the first two rounds who never play in the NHL and there are plenty of players that go in the fourth or fifth round that have great careers. It’s what you do after that gets you to where you want to be, and that’s my mindset going into this.”

For Magyar, MacInnis, Llewellyn and the rest of this year’s draft class, this weekend marks another stepping stone in careers that have already carried them from rink to rink, over borders and far from home. It was a long season spent working hard to showcase their talents, followed by weeks of summer waiting for the draft to finally come, and Nick says he’s glad to finally be in Philly.

“It’s obviously exciting, but it’s also nerve-wracking, and it’s always there. It’s good that it’s finally here, I’m so excited but I’ll also be pretty happy to have it over with and to know, after this weekend, what team I was picked by and have that idea of where my future could be.”