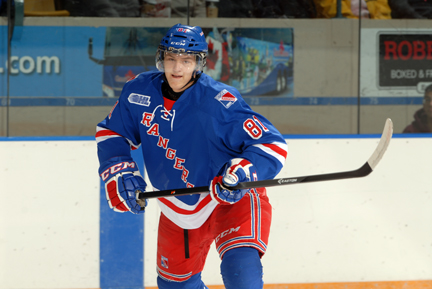 Two goals from defenceman Dmitrii Sergeev lead the Kitchener Rangers to a 5-0 win over the Mississauga Steelheads at the Vic Johnson Arena in Streetsville on Sunday. Jordan DeKort made 27 saves in the shutout victory, while Liam Maaskant, James Mense-Dietrich and Mark Bzowey all added goals for the Rangers.

Two quick goals near the midway point of the opening period gave the Rangers the lead. First, overage defenceman Liam Maaskant picked up his first since joining the team in a trade with the Barrie Colts last month. Nick Magyar was credited with the lone assist on the play at 8:35.

An unassisted goal from James Mense-Dietrich just 1:08 later lifted the Rangers to a 2-0 lead. The tally was the Innisfil, ON native’s first of the preseason.

Kitchener added one more goal before the intermission. Import rearguard Dmitrii Sergeev potted his first of the exhibition season with less than a minute to play. Brandon Robinson and rookie Gustaf Franzen assisted on the play.

The Steelheads out-shot the Rangers 14-11 through 20 minutes.

Sergeev’s second of the game extended the Rangers lead to 4-0 midway through the second period. The power play goal was assisted by Magyar, his second point of the afternoon.

Mark Bzowey recorded his first goal with the Rangers just past the twelve minute mark of the middle frame, pushing Kitchener’s lead to five goals. Veteran centre Curtis Meighan earned an assist, and Maaskant picked up his second helper of the day.

The teams skated through a scoreless third period, with the Rangers leading shots on goal 13-10. DeKort stopped 27 shots for his first win of the exhibition season.

The Rangers sweep their two-game preseason series with Mississauga, after a 2-1 home win on August 31.

The Rangers will host the Sudbury Wolves in their final exhibition game on Wednesday, September 17 at 7:00pm. Tickets to all Kitchener Rangers home games are now available by phone at 519-578-1570 or 1-800-265-8977, via the internet at www.centre-square.com or in person at the Centre In the Square Box Office or the Kitchener Auditorium Box Office.