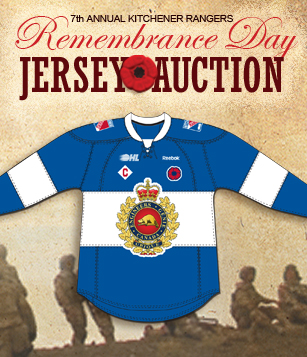 The 2011 Kitchener Rangers Remembrance Day Jersey will be worn on November 11th, 2011 when the Rangers host the Sudbury Wolves at 7:30pm. This is the 7th year that the Rangers have worn a commemorative jersey. Each year the Rangers design a unique jersey that pays tribute to the many veterans who fought battle for us all. The one-time game-worn jerseys will only be available for fans to own through silent auction during the game.

48 Engineer Squadron has a proud history in Kitchener-Waterloo and was active from World War II until 1965. In 2004, the army reactivated the Squadron and since then, many of its members have completed overseas tours of duty with Canada’s Regular Force. The crest featured on the front on this year’s jersey is the Canadian Military Engineers’ Branch Crest.

Fans may bid on these special jerseys through a silent auction that is held on Friday, November 11 during the game. Bidding will start at 6:30pm and close 15 minutes after the end of the game. Winners will be notified by telephone. All proceeds from the auction will benefit veterans through the 78th Fraser Highlanders Fort Conestoga Garrison and the Kitchener-Waterloo Poppy Fund. In the past six years the Rangers commemorative jersey auctions have raised more than $159,000 for various beneficiaries.

1:17
jesse fishman rangers vision
RANGERS VISION: This or That - Jesse Fishman
11 hours ago