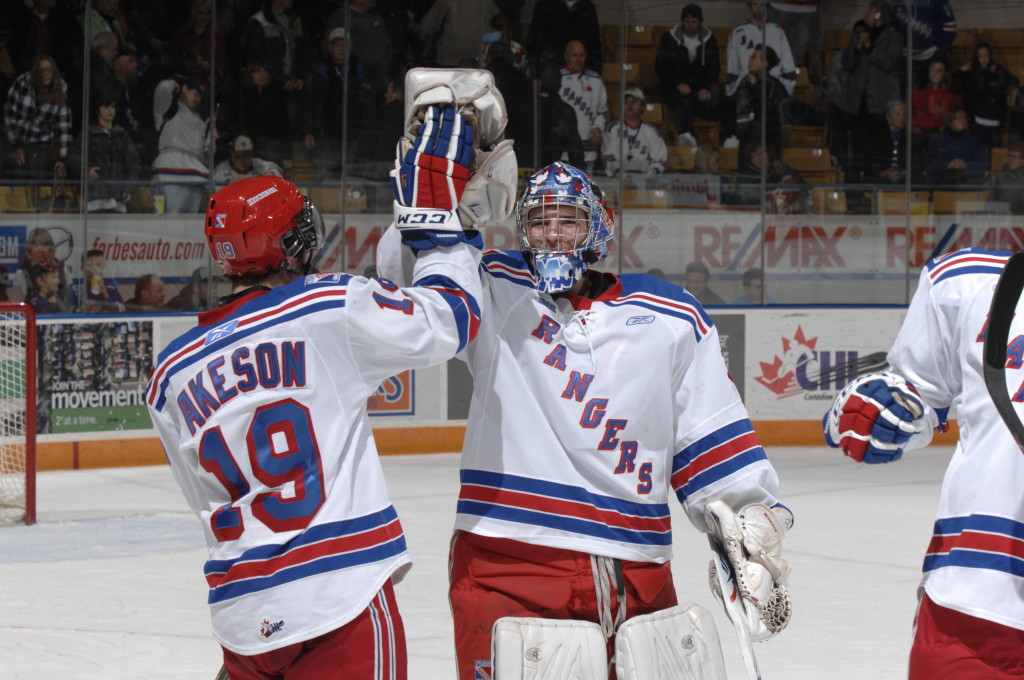 Jason Akeson’s six points making it 11 in the past two games led the Kitchener Rangers to a 8-0 shut-out win over the Belleville Bulls.

Michael Catenacci scored through the pads of Bulls netminder Tyson Teichmann just 62-seconds into the game off a feed from Jason Akeson. The Rangers took a 2-0 lead after Gabriel Landeskog’s one-timer resulted in a goal at the 6:29 mark. Belleville was unable to answer Kitchener and was outshot 15-9 in the period.

Akeson deflected a shot by Catenacci past Belleville’s Teichmann to put the Rangers up 3-0 at 1:28 of the second period. With just a couple seconds left in the period Marcantuoni netted his fourth of the season. The Bulls headed to the dressing room down by four goals.

42-seconds in to the third period, Matt Tipoff advanced the Rangers 5-0 over the Bulls. Landeskog made it 6-0 scoring his second goal of the game at the midway mark of the period. Matia Marcantuoni buried a wrist shot at 10:58 to push the Rangers up 7-0. Akeson closed out scoring in the game at 12:33 to give the Rangers their second eight goal game in-a-row after a 8-2 victory over the London Knights on Thursday, November 4th.

The Rangers return to home ice on Sunday, November 7th to host the London Knights. Game time is 2:00pm. Sunday also marks the 6th Annual Kitchener Rangers Remembrance Day Jersey Auction. Commemorative game jerseys will be available for fans to obtain through auction during the game. Tickets may be purchased by phone at 519-578-1570 or 1-800-265-8977, via the internet at www.theaud.ca, in person at the Aud Box Office or Centre in the Square Box Office.