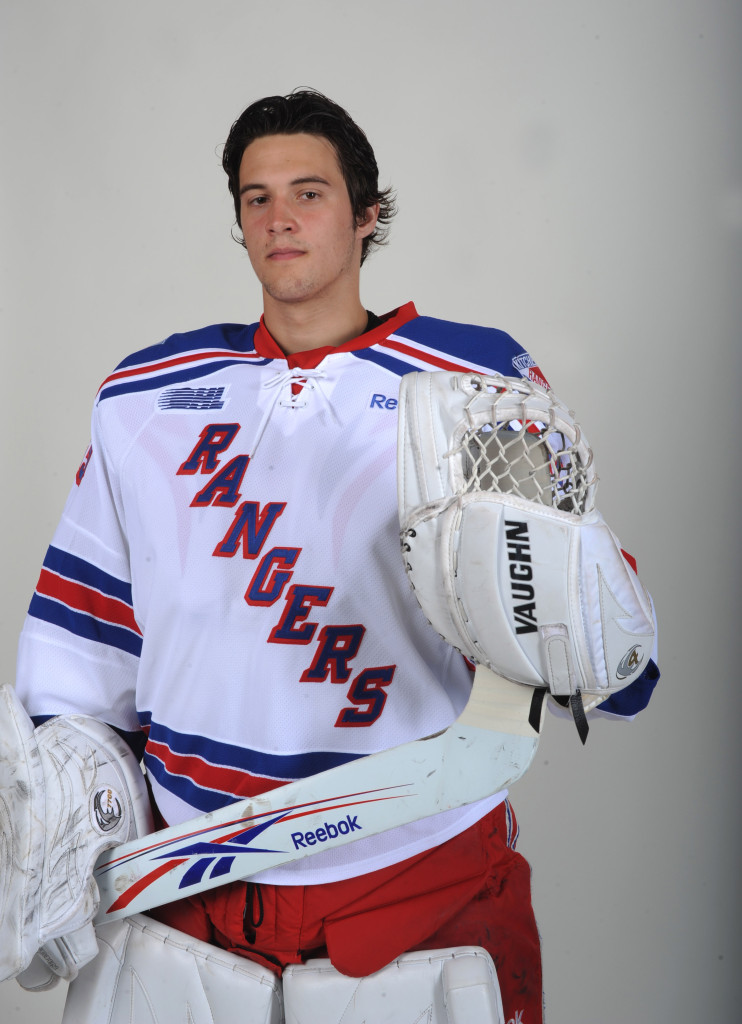 The Kitchener Rangers defeated the Erie Otters 5-1 in their final home game of the regular season on Friday. Tobias Rieder scored twice for the Rangers, while Ryan Murphy sparked the offense with four assists. John Gibson made 49 saves for Kitchener, picking up his 21st win of the year.

The Rangers struck early with a goal just 30 seconds into the opening frame. Ryan Murphy threw the puck at the net and Tyler Randell leapt for it and chipped it by Erie starter John Paul Cesario. Brandon Francisco was credited with the second assist on Randell’s eighth of the season.

The Otters outshot the Rangers 20-12 in the opening 20 minutes of play.

Kitchener extended its lead to two goals early in the second period. Ben Fanelli’s long shot from just inside the blueline flew by the outstretched glove hand of Cesario. His fourth of the year was assisted by rookies Josh Sterk and Brent Pedersen.

Less than three minutes later, Tobias Rieder potted his team-leading 41st of the year, putting the Rangers up 3-0. Radek Faksa picked up a helper and Murphy was credited with his second assist of the night on the play.

Kitchener added one more before the end of the period. Sterk carried the puck over the blueline, before moving it to veteran rearguard Cody Sol. He fired a hard shot from the circle that rattled by Cesario. The overager is having a career year; his 15th goal of the season brings his point total to 38, the same number he accumulated in his previous four OHL seasons combined. Also assisting on the goal was Murphy, his third point of the night.

Erie took advantage of a late power play opportunity to get on the scoreboard. With just two seconds remaining in the period, Connor Brown collected a rebound in front of the Kitchener net and lifted it over a over the sprawling John Gibson to record his 25th of the year. The goal snapped the Rangers keeper’s recent shutout streak at 112:21. Assisting on the play was Anthony Cortellessa, who has recorded three points in his last two games against the Rangers.

The Otters led shots on goal 16-15 in the middle frame.

Rieder notched his second of the game just over six minutes into third period, when he deflected Murphy’s point-shot past Cesario on his glove-side. The German winger’s 42nd was also assisted by Faksa, adding to his lead in OHL rookie scoring race. The Czech import has accumulated 65 points this season.

The Otters out-shot the Rangers 12-8 in the final 20 minutes and finished with a 50-38 overall advantage. Gibson stopped 49 shots in his 21st win of the season and was named the game’s first star.