The RBC School Tour made its second stop of the season on Tuesday, October 29 as Kitchener Rangers veterans Ben Thomson and Matia Marcantuoni brought the Read With the Rangers program to Monsignor Haller Catholic Elementary School in Kitchener.

The players met the students in the gymnasium, where the robust crowd of kindergarten and primary students sat in lines on the floor. One of the students recognized the players, and after greeting them by name, excitedly shared the story of his trip to The Aud to see the Rangers beat the London Knights!

The Hawks eagerly demonstrated their ‘listening bodies’ before settling in for the story, ‘The Hockey Sweater’, a classic hockey tale by Roch Carrier. Matia and Ben took turns reading the book, making sure to turn the pages towards the room, so they could share the illustrations with the children. 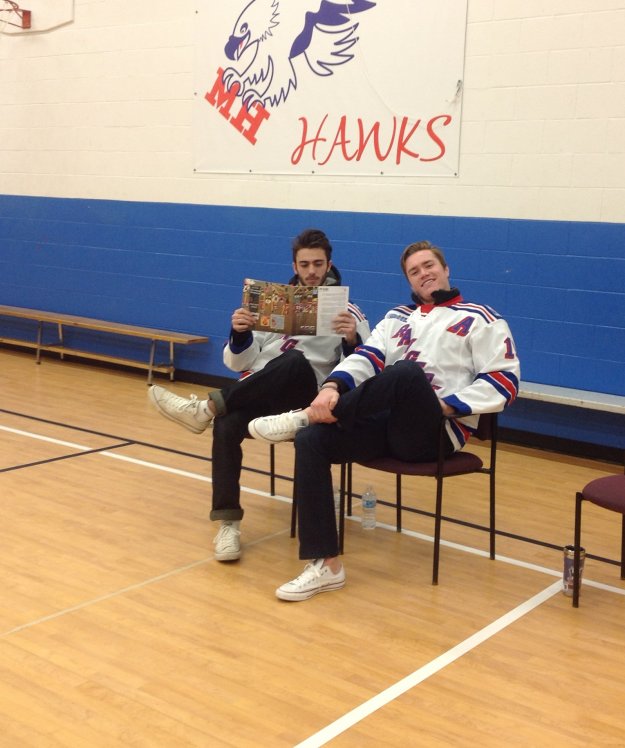 After the story was over, the Rangers questioned the students on lessons of the book, including the importance of sharing, and accepting others. When the players and students had finished talking about the material, the children were invited to ask questions. With many Pittsburgh Penguins fans in the crowd, Matia (himself a Penguins prospect) fielded queries about sharing the ice with Sidney Crosby.

With time winding down, the students of Monsignor Haller presented Ben and Matia with a homemade card, signed by the group. And before leaving the gym, each classroom took a picture with their Rangers guests. With Hallowe’en just around the corner, the traditional ‘say cheese’ was replaced by a much more enthusiastic call: