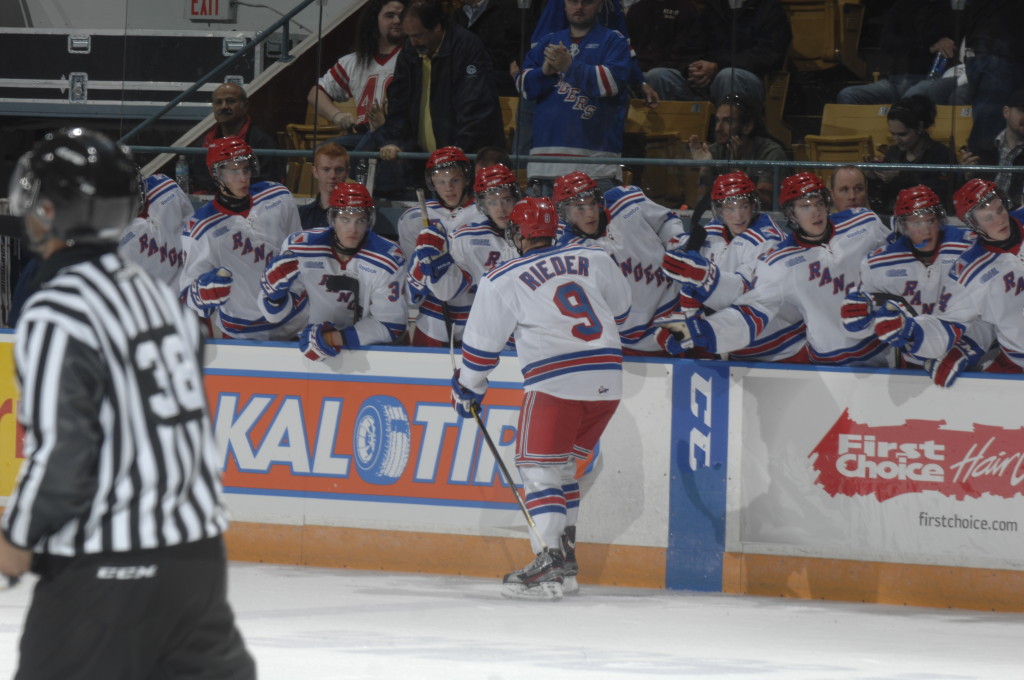 Three goals from Tobias Rieder led the Kitchener Rangers to a 4-1 win over the Saginaw Spirit.

The first period was scoreless until a high shot from Radek Faksa beat Saginaw starter Tadeas Galansky with just 14 seconds left on the clock. The four-on-four goal was Faksa’s third of the season, Eric Ming and Ben Fanelli were credited with the assists, giving Fanelli his first point of 2011-12.

Saginaw got into penalty trouble in the frame with six players sent to the box, including Josh Shalla who received a five-minute major and a game misconduct for a check to the head of Rangers forward Matia Marcantuoni.

Saginaw evened the score with a shorthanded goal at 14:35 of the second period. With Brandon Archibald in the box for holding, Galansky fed Vincent Trocheck a breakaway pass and he fired it through Rangers netminder John Gibson. Trocheck is tied for the team lead in scoring with six points through six games.

The Rangers responded with a shorthanded goal of their own, with ten seconds left to play. Captain Michael Catenacci found Rieder in front of the net and his second of the season made it 2-1 after two periods.

Kitchener held a 14-10 advantage in shots on goal in the second.

Catenacci and Rieder connected again early in the third. Rieder’s second of the night at 1:15 beat Galansky low glove side. Catenacci has recorded six assists in the first four games of the season.

Rieder added an empty netter with under a minute to play to complete the hat trick and make it 4-1 Rangers.

Each team had seven shots in the final period. Gibson stopped 37 of the 38 pucks he faced and picked up his third win of the year.

With the win, the Rangers improve their record to 3-1-0-0. Kitchener leads the season series with the Spirit two games to none.

Kitchener travels to Sarnia tomorrow for a 7:00pm game versus the Sting. They return to home ice on Monday, October 10th at 1:00pm when they play host to the Sault Ste. Marie Greyhounds. Tickets may be purchased by phone at 519-578-1570 or 1-800-265-8977, via the internet or in person at The Aud Box Office or Centre in the Square Box Office.