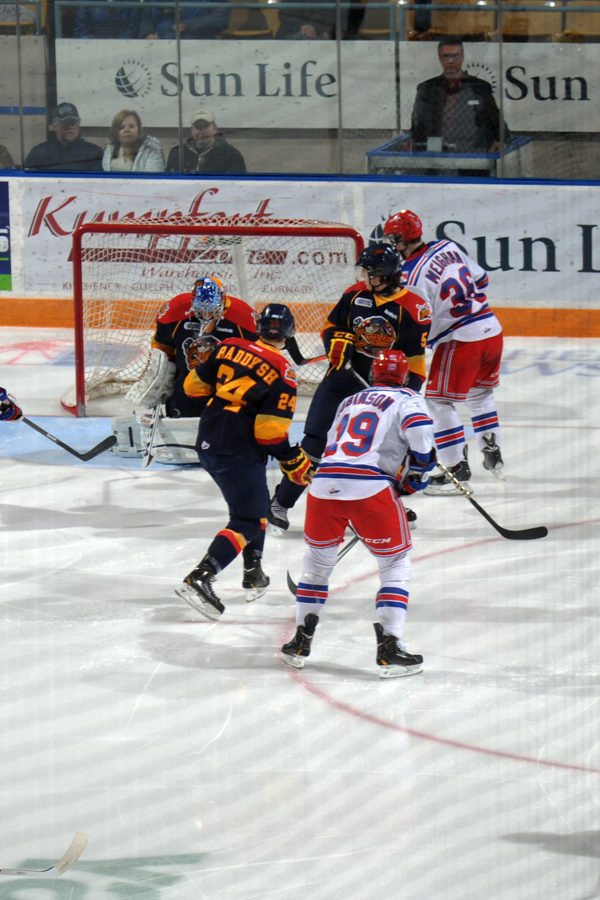 Brandon Robinson’s hat trick lifted the Kitchener Rangers to a 6-2 win over the Erie Otters on Saturday night. Justin Bailey scored twice in the victory, while rookie Mason Kohn picked up his third goal of the season.

The Otters opened the scoring just past the five minute part, capitalizing on the dying seconds of a power play opportunity. Veteran Brendan Gaunce picked up a pass from league scoring leader Connor Brown, and fired it past the outstretched glove of Rangers netminder Jordan DeKort. His 17th goal of the year was also assisted by Travis Dermott.

Gaunce’s second of the game stretched the Otter’s lead to 2-0 at the 7:33 mark of the first period. The former Belleville Bulls pivot broke into the Rangers zone shorthanded, coming in with speed and chipping the puck over DeKort. Overager Dane Fox picked up the helper on the play.

Rookie Mason Kohn put the Rangers on the board 70 seconds later, potting his third of the season. Darby Llewellyn moved the puck over the blueline to Nick Magyar, who shifted it onto the stick of Kohn. The Davie, FL native pushed it past Devin Williams for his second point in as many games. With his assist, Magyar moves into a tie for the team-scoring lead with 24 points.

With 21 seconds remaining in the frame, Justin Bailey pulled the Rangers even at 2-2. The Buffalo Sabres prospect forced a turnover inside the Otters’ blueline, turned and snapped a high shot over Williams for his 13th of the season.

Erie outshot the Rangers 16-9 in the opening 20 minutes.

Kitchener earned its first lead of the game 2:40 into the second period, when Brandon Robinson tipped Dmitrii Sergeev’s long shot under the pad of Williams to tally his sixth of the year. The assist was the first career Ontario Hockey League point for Sergeev, a rookie defenceman from Russia who was selected by the Rangers in the first round of the 2013 CHL Import Draft. Third-year centre Curtis Meighan also assisted on the play.

The Rangers extended their lead less than three minutes later when Robinson deflected Jacob Cascagnette’s shot over Williams for his second of the game. The assist was the first career OHL point for Cascagnette, a freshman forward from Kitchener. Captain Ben Fanelli was credited with the second helper, giving him points in back-to-back contests.

The Rangers led shots on goal 14-7 in the second period.

Kitchener capitalized with the man advantage early in the third period to jump ahead 5-2. Bailey picked up his second marker of the night with a crisp shot from the top of the circle, bringing his total to 14 on the year. Rearguards Logan Schmidt and Max Iafrate earned assists on the goal scored 19 seconds into the frame.

Robinson completed the hat trick with four minutes remaining on the clock to put the Rangers up by four goals. The former North Bay Battalion winger carried the puck into the zone with speed, cutting towards the net and banking a shot off the post and behind Williams for his second career three-goal effort. Meighan assisted on the play, collecting his second helper of the night and extending his recent point streak to four games.

The Rangers continued to out-shoot the Otters in the third period, finishing with an 18-10 advantage in the frame and a 41-33 overall advantage. DeKort made 31 saves in the victory.

The Rangers and Otters meet again on Tuesday, December 31 at the Erie Insurance Arena. The team returns to the Kitchener Memorial Auditorium on Friday, January 3 to host the Sarnia Sting at 7:30pm. Tickets to Rangers home games are available by phone at 519-578-1570 or 1-800-265-8977, via the internet at www.centre-square.com or in person at the Centre In the Square Box Office or the Kitchener Auditorium Box Office.