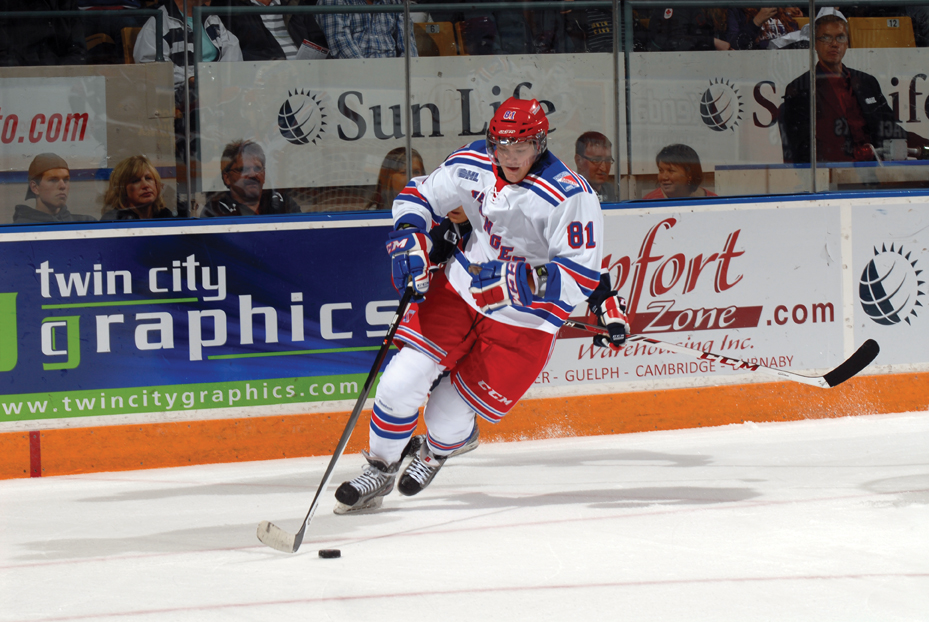 Dmitrii Sergeev scored his first career goal in the Kitchener Rangers’ 2-1 overtime loss to the Plymouth Whalers on Saturday night.

Both goaltenders were perfect through 20 minutes, with the Whalers out-shooting the Rangers 12-10 in a scoreless first period.

Kitchener opened the scoring near the seven minute mark of the middle frame. With Darby Llewellyn providing the screen in front of the Plymouth net, Dmitrii Sergeev launched a shot from just inside the blueline that soared by goaltender Alex Nedelkojvic. The Russian import’s first career Ontario Hockey League goal was assisted by Matia Marcantuoni and Ben Fanelli.

The Whalers continued to lead shots on goal in the second period by a 14-8 margin.

Defenceman Gianluca Curcuruto pulled Plymouth even with less than nine minutes to play, launching a long point shot past Jordan DeKort for his sixth of the season. The fourth year veteran’s marker was assisted by Danny Vanderwiel and Vincent Scognamiglio.

The 1-1 deadlock remained through the end of the frame, sending the contest to overtime. Plymouth held a 15-8 advantage on the shot clock in the period.

A power play tally three minutes into the extra frame lifted the Whalers to a 2-1 win. Import centre Victor Crus Rydberg scored the winner, his eighth goal of the year, with assists from Mathieu Henderson and Waterloo native Zach Lorentz.

Plymouth finished with a 42-26 advantage in shots on goal.

The Rangers welcome the Erie Otters to the Kitchener Memorial Auditorium on Monday, February 17 at 2:00pm. Tickets to Rangers home games are available by phone at 519-578-1570 or 1-800-265-8977, via the internet at www.centre-square.com or in person at the Centre In the Square Box Office or the Kitchener Auditorium Box Office.