Skinner, Landeskog Face Off at WHC 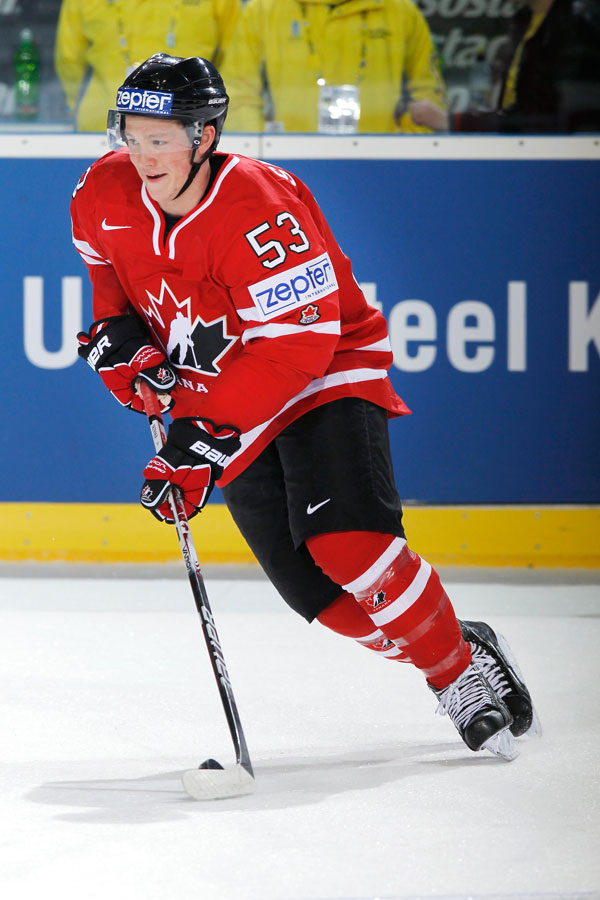 Rinks have a way of building bonds and developing friendships but there’s no love lost when it comes to representing your country. Two former Rangers teammates will square off on Thursday in the quarterfinals at the 2013 IIHF World Hockey Championship in Stockholm when Jeff Skinner and Team Canada take on Gabriel Landeskog and the hometown Swedes.

Both Skinner and Landeskog have climbed quickly to stardom since graduating from The Aud. Their careers followed similar trajectories: first round draft picks (Jeff by the Carolina Hurricanes in 2010 and Gabe by Colorado the following year), they both cracked their pro team rosters right out of training camp. As an 18-year-old, Skinner led the league in rookie scoring, notching 63 points in his first NHL season and became the youngest player ever to be named to the All-Star game. After an impressive debut campaign, he was named the 2011 NHL Rookie of the Year, collecting the Calder Trophy at the end of season NHL Awards.

With big footsteps to follow, Landeskog didn’t disappoint. Rangers fans watched with pride as the Avalanche’s second overall pick was recognized with the 2012 Calder Trophy after he appeared in all 82 regular season games and led his team in goals, shots and plus/minus. Ever-modest, the affable winger said he wasn’t expecting to succeed his old friend.

“Getting my name called was a surprise, to be honest with you. I wasn’t ready for it, but it was fun and a great experience that I’ll remember for a long time.”

The honours continued for Gabe when Colorado made him their team captain in early September. At 19 years and 286 days old, he was the youngest player in NHL history to don the ‘C’ for his team.

The two Rangers alumni were former roommates who have remained close. According to Gabe, they make a point to grab dinner on the rare occasions that his Western Conference Avalanche take on the Hurricanes. But there’s no room for niceties when national pride is on the line.

Canada earned a spot in the quarterfinals on Sunday with a 2-1 victory over the Czech Republic. Skinner scored the game winner in that contest, going end-to-end, around the Czech net and burying the wraparound behind Winnipeg Jets netminder Ondrej Pavalec. After preliminary round action came to a close earlier this week, Team Canada had posted a record of four wins, one overtime win and one overtime loss, finishing second in their group. This is the third consecutive year that Skinner has traveled to the World Championship with Team Canada, but he has yet to bring home a medal. The Canadian squad hasn’t hit the podium at the event since 2009, when the red and white battled to a second consecutive silver medal  and are trying to snap a gold medal draught that dates back to 2007.

To make it back to the podium, Skinner and his compatriots will have to push past Landeskog and Team Sweden, who are also looking to return to medal-winning form after being left off the podium in 2012. Gabe made his debut at this event last year, returning to Europe and recording one goal and four helpers in eight games for Tre Kronor. The former Rangers captain, who had the fans on their feet when he returned to Kitchener to drop the puck at a home game this season, has scored three goals at this year’s tournament including a game winner against Slovenia.

Canada and Sweden are two of the most decorated teams in tournament history, with 46 and 43 medals respectively, but only one can add to that total this year. Tune in and cheer for your favourite Rangers alumnus! The game is scheduled to air on TSN beginning Thursday, May 16 at 2:00pm ET.