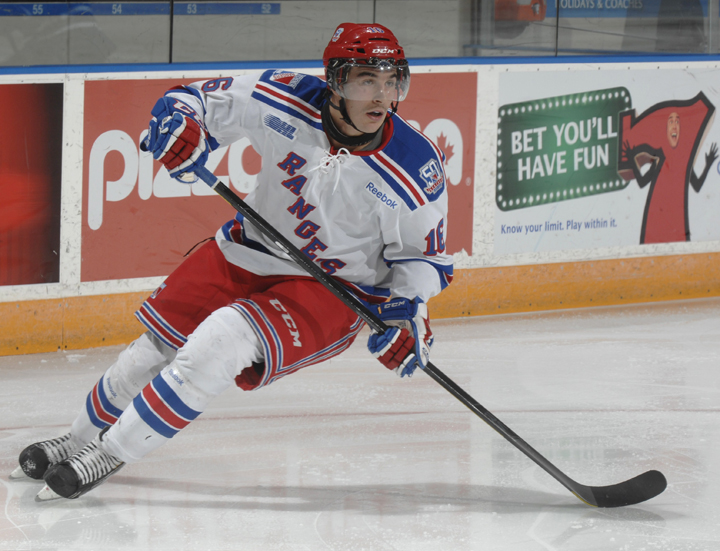 Brent Pedersen scored the lone goal in the Kitchener Rangers’ 2-1 loss to the Windsor Spitfires on Saturday night. The goal was the Carolina Hurricanes prospect’s second in as many games and was assisted by Nick Magyar, who has recorded four points in his last three outings.

The Spitfires opened the scoring nearly 13 minutes into the game, sending a rainstorm of stuffed animals to the ice on their

Teddy Bear Toss night. Montreal Canadiens prospect Brady Vail carried the over the Rangers’ blueline, lifting a shot over the glove-side shoulder of netminder Jordan DeKort. His 13th of the year was assisted by Ryan Moore and Eric Diodati.
Windsor led shots on goal 10-8 through 20 minutes.

Both goaltenders were perfect in the second frame, and the Spitfires maintained their 1-0 lead headed into the intermission. Windsor netminder Alex Fotinos was forced to make 18 saves in the period, while the former Spitfire DeKort stopped 12 pucks for Kitchener.

With less than five minutes remaining, the Rangers pulled even at 1-1. Rookie Nick Magyar got the play started, pushing the puck to Logan Schmidt at the point. The Kitchener native’s shot on goal was stopped by Fotinos, but Brent Pedersen picked up the rebound and hammered it under the netminder to record his eighth of the year and second in as many games. With his assist, Magyar has points in three straight games and leads all Kitchener freshmen with 19 points this season.

Sam Povorozniouk’s first goal as a Spitfire put Windsor ahead 2-1 with 11.2 seconds left to play. The former Kingston Frontenacs forward fired a wrist shot that beat DeKort glove-side, bringing his season total to seven. Ben Johnson and Diodati were credited with assists on the play.

The Spitfires out-shot the Rangers 10-9 in the third, though Kitchener finished with a 35-32 overall advantage. With the victory, Windsor takes a 2-0 lead in the season series.

The Rangers return to the Kitchener Memorial Auditorium on Tuesday, December 10  to host the London Knights in the annual Teddy Bear Toss game at 7:00pm. Tickets to Rangers home games are available by phone at 519-578-1570 or 1-800-265-8977, via the internet at www.centre-square.com or in person at the Centre In the Square Box Office or the Kitchener Auditorium Box Office.