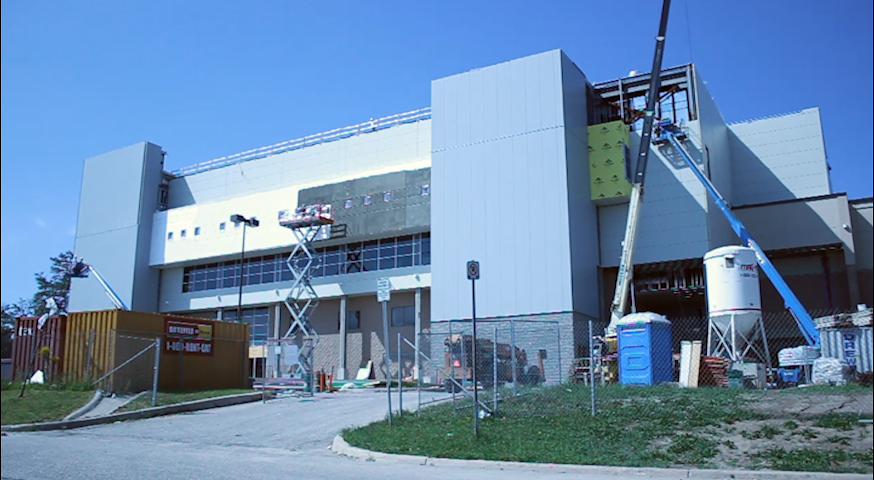 Stage Seven of The Aud Expansion Project 2012 involves the final milestone event being achieved – the removal of the old roof that previously covered the east side of the building.

The newly-added expansion is now nearing full enclosure. The exterior of the north end is complete, while the south end facing East Avenue is scheduled for completion in the next week. On the Ottawa Street side, stucco work has already begun.

Inside The Aud, the seating is being prepared for the new sections and the floors have been sealed. Stairs have been poured, and installation of the new seats is scheduled to begin on September 17. Railings have been constructed for the upper levels in accordance with new building codes and are currently being painted.

Looking ahead, the dressing room and business operations areas are nearing completion, with furniture and equipment expected to be installed in the coming weeks. In the arena, cleaning and cooling is scheduled to be completed in early October, at which point ice making will begin.

“We’re very excited and happy with how the entire project has moved forward since we began in February,” says Kitchener Rangers Chief Operating Officer Steve Bienkowski. “A lot of the credit goes to the various tradespeople who have worked diligently to meet the tight timelines.”

The Rangers will play their first game in the renovated Kitchener Memorial Auditorium on Friday, October 19, when they host the Oshawa Generals.

CLICK HERE to view the newest video update on Stage Seven of The Aud Expansion Project 2012. Chief Operating Officer and Governor of the Rangers, Steve Bienkowski provides details on the project.