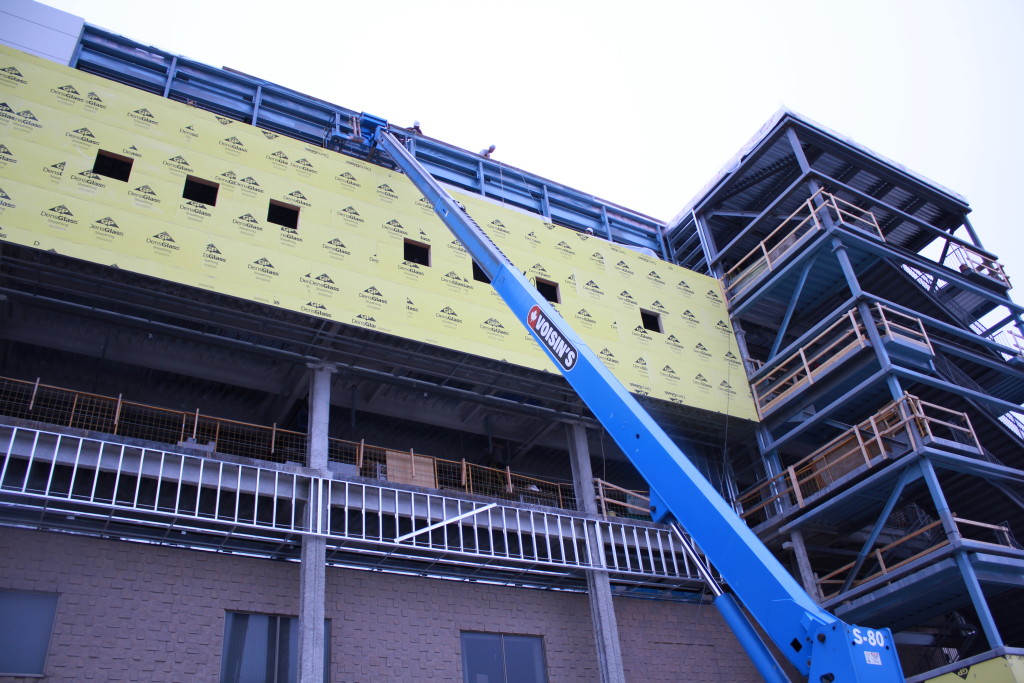 Stage Six of The Aud Expansion Project 2012 includes further progress on both the interior and exterior of the building.

Over the past five weeks, the new roof trusses have been installed and the expansion area has been covered with a new roof. This landmark stage in construction was completed on schedule on July 23rd, 2012 and as a result the Kitchener Memorial Auditorium is now closed to the public, and will remain so until October.

Inside the building, work continues on the business offices, including the installation of drywall. Concrete blocking continues in the area that will house the team dressing room. Fans driving past the building will also notice that the elevator shaft has been completed all the way to the rooflines.

Renovations in The Outpost, the official retail outlet of the Kitchener Rangers continue, including the installation of new windows and the completion of the floors. Soon, passers-by will notice a new exterior wall on the Ottawa Street side of the building.

The new concourse is developing with the addition of concession areas, restrooms and other guest facilities.

The next stage in the expansion project will involve the removal of the old roof over the arena. The concrete walls and roof below the new roof trusses will taken out, and the existing steel beams will be cut and lowered to ice level before being carried out from inside the building.

The Aud Expansion Project 2012 continues towards its completion in October 2012.

CLICK HERE to view the newest video update on Stage Six of The Aud Expansion Project 2012. Chief Operating Officer and Governor of the Rangers, Steve Bienkowski provides details on the project.