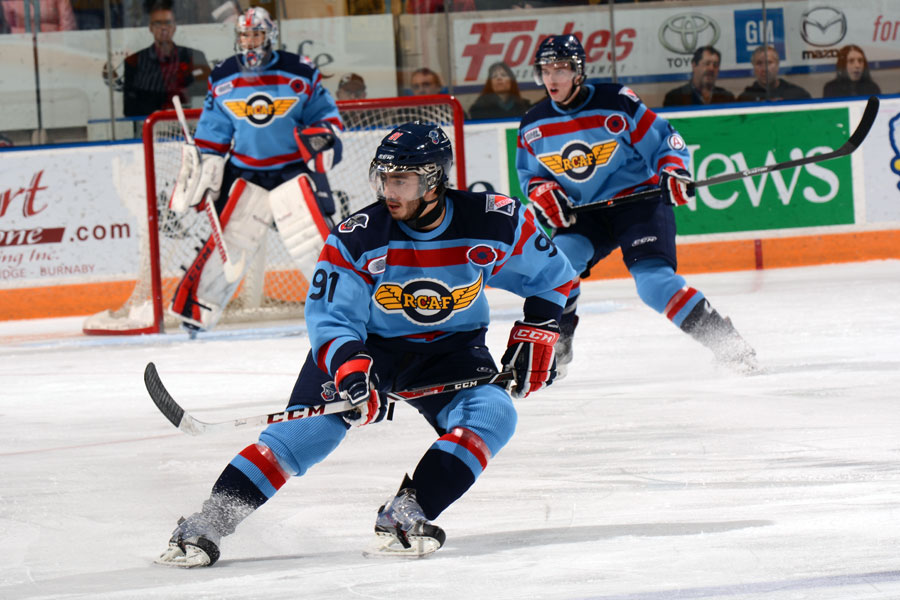 Ben Thomson scored and added an assist in the Kitchener Rangers’ 5-3 loss to the Windsor Spitfires on Friday night. Darby Llewellyn and Matia Marcantuoni also recorded goals for Kitchener, while Scott Teskey collected his first point in a Rangers uniform.

The Rangers opened the scoring just past the five minute mark of the opening frame. Rookie defenceman Frank Hora’s point shot was blocked by Windsor netminder Alex Fotinos on to the stick of Scott Teskey. His effort was also denied, but the rebound was picked up and shovelled into the net by sophomore winger Darby Llewellyn for his fourth of the year. Teskey’s assist was his first point since joining the Rangers in an offseason trade with the Mississauga Steelheads.

Kitchener extended its lead near the halfway mark of the first period as overage forward Ben Thomson stripped the Spitfires of the puck and fired it past Fotinos. The unassisted tally was the New Jersey Devils prospect’s first of the season.

The Spitfires out-shot the Rangers 16-11 through the first 20 minutes of play.

Matia Marcantuoni pushed Kitchener to a 3-0 lead late in the second period. Thomson carried the puck behind the Spitfires net, moving a quick pass in front to the charging Pittsburgh Penguins prospect. Marcantuoni snapped a shot past Fortinos for his fourth of the year. Ben Fanelli also earned an assist on the play.

Two quick power play goals late in the frame pulled Spitfires within one goal headed into the intermission. With a two-man advantage and less than a minute to play, captain Kerby Rychel potted his 12th of the season behind former Windsor goalie Jordan DeKort, with assists from Josh Ho-Sang and Slater Koekkoek.

Nick Ebert’s second of the year, scored 16 seconds later was a high shot that soared over DeKort, cutting the Rangers’ lead to 3-2. The goal was set up by defenceman Trevor Murphy and Rychel, who moved into the Spitfires scoring lead with 22 points.

Windsor continued to lead shots on goal in the second by a 15-8 margin.

A third power play goal from the Spitfires evened the game at 3-3 with less than ten minutes to play. Eric Diodati found the back of the net with five seconds remaining in the man advantage, slipping the puck between the pads of DeKort for his fourth of the season. Assists on the play were credited to Brady Vail and Murphy (his second of the game).

Windsor took its first lead of the contest less than two minutes later when Remy Giftopolous tipped a shot past DeKort to record his fourth of the year. Ho-Sang and Rychel collected the assists, their second and third points of the night, respectively.

An empty net goal from Ben Johnson with one minute remaining sealed a 5-3 Spitfires win. The unassisted shorthanded tally was the veteran forward’s eighth of the year.

Each team fired eight shots on goal in the third period, but Windsor did finish the game with a 39-27 overall advantage on the shot clock.

With the win, the Spitfires take a 1-0 advantage in the four game season series.

The Rangers hit the road November 1 when they visit the Guelph Storm at 7:30 pm. They’ll return to the Kitchener Memorial Auditorium on Friday, November 15 for a 7:30 pm meeting with the Owen Sound Attack. Tickets to Rangers home games are available by phone at 519-578-1570 or 1-800-265-8977, via the internet at www.centre-square.com or in person at the Centre In the Square Box Office or the Kitchener Auditorium Box Office.