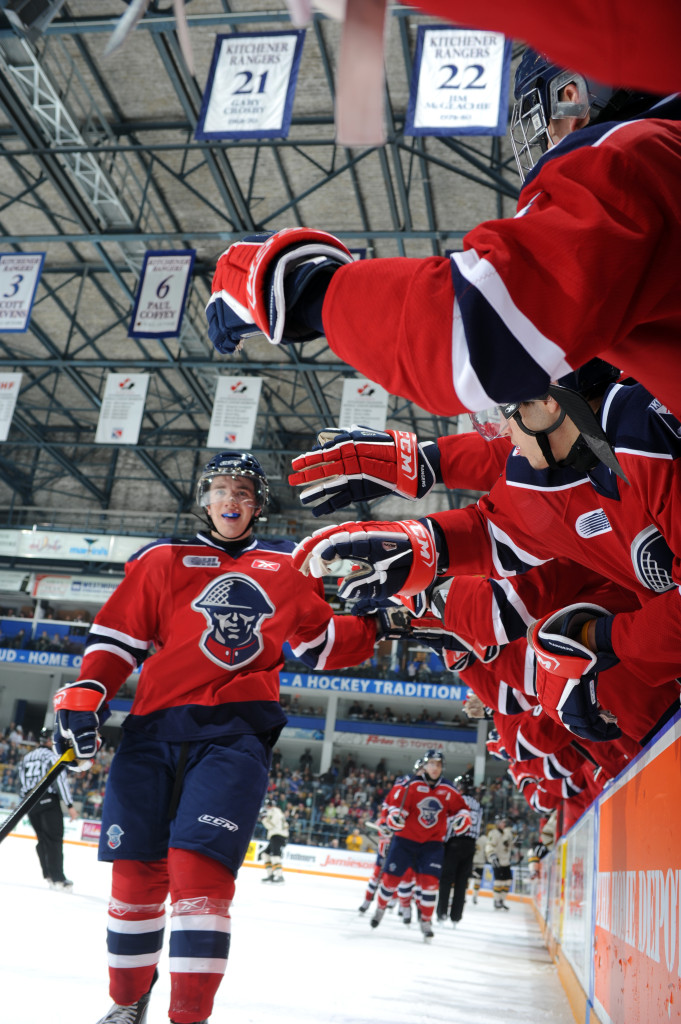 The Kitchener Rangers defeated their divisional rivals the London Knights 5-4 in a shootout Tuesday night at the Aud. Zach Lorentz scored the winner for Kitchener and finished as the game’s first star.

London got on the board first, when Jared Knight jumped on a rebound and fired it high glove-side past Kitchener netminder John Gibson. The goal was the third-year winger’s eighth of the season, assisted by Andreas Athanasiou and Colin Martin.

The Rangers would tie the score six minutes later, with a great solo effort from Keli Grant, who was appearing in just his second game of the season. The forward banked the puck off a defender in front of the net and past Knights’ goalie Michael Houser for his first as a Ranger.

Waterloo-native Zach Lorentz added a power play goal for his hometown team at 16:31, assisted by Radek Faksa and Ben Thomson. Just 14 seconds later, Eric Ming picked up a cross-ice pass from Thomson and fired it past Houser to extend the Rangers’ lead to two. Crescenzi also picked up a helper on Ming’s second goal of the season, making Tuesday his fourth multi-point game of the season.

Kitchener out-shot the Knights 14-7 in the opening frame.

The Rangers continued to press with the man-advantage in the second. Houser made the initial stop on a shot from Ryan Murphy, but Radek Faksa jumped on the rebound and found the back of the net to make it 4-1 Kitchener. Julian Melchiori also assisted on Faksa’s fifth goal of the year.

The Knights got one back before the period was out. Max Domi slid a rebound past a sprawling Gibson for the eighth goal of his rookie campaign.

London held the advantage in shots on goal in the period, out-firing the Rangers 13-7.

The Knights evened the score with two quick goals from Vladislav Namestnikov. The Russian forward’s two tallies came less than 30 seconds apart and brought his season total to ten, more than any other London skater.

With the score knotted at 4-all, the game would go to overtime. London continued to out-shoot the Rangers in the third, holding a 16-7 advantage in the period.

The teams remained deadlocked through the overtime, sending the contest into a shootout. The Knights had four shots on goal to Kitchener’s two, and London finished with a 40-30 overall advantage.

Zach Lorentz would score the only goal of the shootout to give the Rangers the win. With the victory they improve to 7-5-0-0, while the Knights sit at 11-3-0-0.